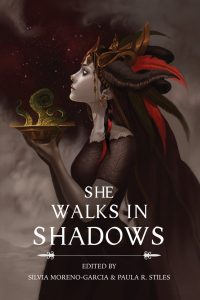 Out of the Shadows

She Walks in Shadows is the fruit of an Indiegogo campaign to create “the first all-woman anthology of stories inspired by H.P. Lovecraft.” Thanks to the campaign’s success, the editors were able to commission a grand total of 25 original stories, and include illustrations by 10 female artists. The book’s also been graced by two very gifted author/editors, Silvia Moreno-Garcia and Paula Stiles. And it’s already won a World Fantasy Award in the Anthology category, and been a finalist in the Locus Poll for Best Anthology. Some of its stories are already starting to pop up in year’s best anthologies and other collections – such as “Violet is the Color of Your Energy” by Nadia Bulkin, already included in Year’s Best Weird Fiction, Volume 3.

At this point, you probably don’t need any more recommendation to go out and buy it, but I’ll try to give some idea of how it got those accolades. The variety and ingenuity of the stories is striking. I don’t know if this is because the gender of the authors allows them to reach places that male Lovecraftians cannot, or simply down to the good taste and inspirational guidance of the editors, but the results really stand out. The original Indiegogo outline states that each author was invited to pick up on a (nominally) female character or entity, whether central or peripheral, in Lovecraft’s writing and expand on them, but in most instance you’d be hard put to spot anything remotely derivative in the resulting tales. There is little to none of the Yog-Sothothery whose Cthulhoid Capital-Letter Cliches disfigure so much derivative Lovecraftian fiction. In fact, the collection does a massively good job of confounding expectations.

The introduction explains that “whatever women appear in Lovecraft’s stories lurk distantly in the shadows” and that “for a long time, the Lovecraft Mythos was a male-dominated field,” but the editors seem to have resolved to even the score by encouraging their authors to be as original and diverse as possible. Pandora Hope’s “Eight Seconds,” for instance, approaches Laird Barron levels of hard-boiled true grit, in the Australian Outback, of all places. Eugenie Mora’s “The Eye of Juno” channels Lovecraft’s few excursions into classical Antiquity. Molly Tanzer’s “The Thing in The Cheerleading Squad” is one of the few tales that explicitly hinges on gender, and it does that by picking up on one of Lovecraft’s stories that had a woman as a central character – but only to play all kinds of shell games with sexual ambiguity. “Lockbox” by E. Catherine Tobler features male gay protagonists, but that little detail kind of gets lost in its dazzling, disorienting Chinese-box (sic.) construction, where footnotes assume an uncanny life of their own.

The editors express the hope in their introduction that the book “will provide fresh takes on a number of characters and creatures from Lovecraft’s stories, and add some completely new element to the Mythos.” Their hopes are justified in spades. I could think of one or two other equally fine authors and stories that also could s

“He found the ruin by mistake, a wrong turn down a street that fizzled out and turned into a rutted dead end choked with undergrowth. Housewarming, helping friends move, whatever the event would have become over the course of a sloppy October night, there was no house Edgar could actually see, until — he said with a dramatic pause — the ground crumbled under his feet and he found himself standing within the shattered remains of what he first called a cathedral. It was, he said, as if an entire abbey had been sunk into the ground and buried over for a hundred thousand years.”
—  “Lockbox” by E. Catherine Tobler

“If you deny me this indulgence, I will move on to the next world, for there are many. But know that, given a choice, this is the world I would remake; for I am not divorced entirely from my humanity. Although I no longer have need for it in my soon-form, I want to be one with the most fabulous and most profane embodiment of the beautiful chaos of the cosmos.
What say you?
May I have your permission to devour the world?”
—  “De Deabus Minoribus Exterioris Theomagicae,” by Jilly Dreadful

“Outside, the rain recedes, letting in daylight: bright morning, blazing gold-green through drooping leaves to call steam up from the sodden ground, raise cicatrice-blisters of moisture from Riverside’s walls. The fields glitter like spiderwebs. Emerging into it, I smile for the first time in so very long: lips, teeth, muscles flexing. Myself again, for all I wear another’s flesh.”
—“Hairwork,” by Gemma Files