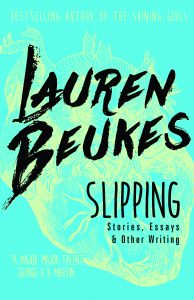 Slipping is a collection from a writer who many readers will know only from one book: Shining Girls. That’s their loss. Because Lauren Beukes, judging from these tales, is one of the best fictional chroniclers of modern life per se. If many of the stories use science fiction tropes, it’s with a literary intent that mixes genres freely to get a far better purchase on the contemporary reality of South Africa, and the world at large. Beukes’s sci-fi South Africa seems far closer to post-Black Lives Matter America or post-Brexit Britain than many versions of their own land from native authors. Western readers may not want to face the implications of that parallel: Beukes makes it unavoidable.

Any fans who expect Beukes’s short stories to be some kind of post-feminist psalmody against male violence, though, are liable to be disappointed – for about the first five minutes anyway. (The essay “All the Pretty Corpses” is also in the volume, for those expectations.) This fiction is as close to J.G. Ballard or William Burroughs, in spirit, as to Ursula LeGuin – or to Neill Blomkamp.

We have techno-enabled body horror, ultraviolence, societies in meltdown, gunplay, queasy biotech, twisted glitterati, and giant killing machines, mostly rendered in a sharp, acerbic, hard-edged style that rarely slows down enough to point to an overt moral. The Ballardian parallel also extends to Beukes’s experimental leanings – there are stories that employ cut-up techniques, and others with a strong whiff of Pop Art.

The title story manages to draw most of these threads together in a very unsettling tale that will probably do even more than Oscar Pistorius to link South Africa indelibly in your mind with prosthetically enhanced athletics. Others are likewise almost definitive depictions of modern abuses – it’s hard to imagine a better, more sardonically twisted, account of catfishing and internet scams than “Easy Touch,” for instance. Many of the stories also predate Beukes’ breakthrough novel, 2010’s Zoo City. As a short story writer, I will say that Beukes writes effusive, overflowing prose that occasionally bursts the bounds of her form – the long lists in “Unaccounted,” for instance. No wonder she’s such a capable novelist.

Not all of the stories, especially the early ones, are weird tales or fantastic fiction in any narrow dogmatic sense – never mind the essays and journalism collected at the end of the volume – but they all bear the imprint of the same fantastic imagination.

Beukes doesn’t seem in any hurry to leave South Africa behind, even if her Cape Town closely resembles Ballard’s Super-Cannes. Just as well, given how essential the South African environment seems to be for her imagination, even when she’s writing about Chicago, or grotesquely fecund alien planets. I just hope she invests plenty in home security and bodyguards to defend her film rights and foreign rights wealth. Given the society she sketches in charcoal, blood red, and dayglo spraybomb, you can see the risks. But pray that South Africa never loses one of its brightest, best chroniclers, for that would be a sad loss for the country, and for us all. Often jolting reading.

Oh, Dirk comes off as sweetie-darling charming, but trust me, he’s the coldest, savviest, most flamboyantly evil bastard of a marketing pimp you ever could meet. Although when I pointed this out to Jude once, in a rare off-camera moment, she just smiled in that devilishly cute way she’s cultivated, tipping her jaw slightly down and raising an eyebrow, half-sly, half-sweet, like it was obvious. ‘Ja-a. Lucky for me! – From “Pop Tarts”

In her private life, however, Unathi tended to be outrageous. Back in Johannesburg, before she’d been recruited to the most elite mecha squadron on the planet, she hung out in Newtown, where she’d been amakipkip to the max. Named for the cheap multicolored popcorn, the neo-pantsula gangster-punk aesthetic had her pairing purple skintight jeans with eye-bleeding oranges and greens. A pair of leopard-print heels, together with her Mohawk, added five inches to her petite frame. – From “Unathi Battles the Black Hairballs”

I never wanted to be a journalist. The newspapers seemed all bore and gore – column space crammed with crime scene mop-ups, politicking and mawkish personality profiles. I also never planned to stay in Cape Town. When I came to the city in 1996, after a year of semi-feral gypsying around the world, it was supposed to be only for one indolent summer. I fully intended to return to Johannesburg, my hometown, to pavements slick with jacaranda blossoms and malls slick with money and skies bristling with violence – From “Adventures in Journalism”