The Afterlife of Emerson Tang, by Paula Champa 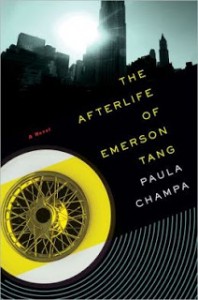 Metaphysical, Elegant Treatment of Family and the Afterlife

Although the plot revolves around the wealthy collector Emerson Tang and a car, this is really the story of Beth, Emerson’s archivist.

Beth has had trouble connecting with other people, ever since a painful near-death experience as a child. She has felt a lack of direction and a distance from other people, as if a wall of glass separates her from life. In the process of helping the dying Emerson settle his affairs, Beth grapples with the question of why she’s alive, and discovers a web of connection between herself, Emerson, his family, her family, a famous artist, and yes, that car.

This deeply resonant novel is not for car lovers, only. The Beacon serves as a metaphor for all the things that humans project their hopes, dreams and identities into. It also perhaps alludes to the bodies that carry us through this world, beautiful shells housing interchangeable engines.

“The question entered my mind: What if the experience of death was fundamentally the way each person required it to be? In essence, this was possible—no more impossible than any other belief; in fact, it was a tenet of some belief systems and corresponded with the very existence of so many.

There was a cord for birth and one for death, but mine was not cut. In that plastic tent of torture, my death cord was unfurled, stretched, considered, but I remained attached to both sides. Dangling. Dead, then undead. In the doorway, bouncing back and forth from one side to the other. It was not the method of dying I would choose for myself again.”

A beloved car becomes a piece of us—a way back into our histories or forward into our destinies. For Emerson Tang, the only son of a prominent New England family, that car is a 1954 Beacon. A collector—of art and experience—Emerson keeps his prized possession safely stored away. But when his health begins to fail, his archivist and caretaker is approached by a secretive French painter determined to buy the Beacon at any cost. They discover that the Beacon has been compromised and that its importance reaches far beyond Emerson’s own history. Soon they run into another who shares their obsession: the heir to the ruined Beacon Motor Company, who is determined to restore his grandfather’s legacy. These four become unlikely adventurers, united in their aim to reunite the Beacon’s original body and engine, pitted against one another in their quest to claim it. Each new clue takes one closer to triumph, but also takes these characters, each grieving a deep loss, toward finding missing pieces of their own lives. A novel of strangers connected across time, through a car that is so much more than a car, it asks us what should be preserved, what memories to trust, and whether or not some of the legacies we hold most dear—including that grand contraption, the automobile—can be made new again.

Get your own copy!

Among Others, by Jo Walton