The Asylum of Dr. Caligari, by James Morrow 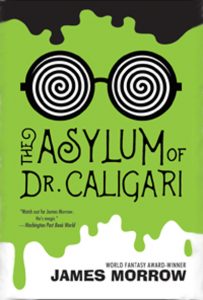 Now he began spinning in circles—like a deranged dancer, or a whirling dervish, or a man inhabited by devils….

James Morrow explores ideas with visionary audacity and a satirical (yet nonetheless disturbing) bent perhaps unequaled since Philip José Farmer’s Riverworld series—as if directed by Andrei Tarkovsky. I like to imagine eavesdropping as some curious stranger—hearing Morrow’s profession—blurts, “Ooh, an author! What do you write?”

“Well,” says a stoic Morrow, “one of ’em features the divine half-sister of Jesus Christ. She’s been reincarnated in Atlantic City. Another one picks up after the death of God, and no one knows what to do with the 2-mile-long corpse. Bummer.”

Morrow’s new novella, The Asylum of Dr. Caligari, is political satire well beyond the legendary 1920 German Expressionist film The Cabinet of Dr. Caligari. Flinging love-darts at Freud, surrealism, Nietzsche (brilliant madman, or just plain mad?), Picasso, and the intrinsic (or not) value of art, Morrow pulls off that most difficult “trick”: humor rooted in sadness, particularly the type churning beneath history like a black river.

Among the doctor/sorcerer’s covert weapons is a mural-sized painting akin to Picasso’s Guernica, which charges anyone who views it with murderous compulsions. Enter Francis Wyndham, artist, who teaches art therapy at Caligari’s Weizenstaat “clinic,” where patients apparently are urged to enter what can only be described as induced cognitive dissonance—a state worse than that which brought them there. But it’s World War I, and they all could die at any moment. As another great writer once wrote: Nothing is true. Everything is permitted.

It certainly is in The Asylum of Dr. Caligari, whose entrance might come with a warning: Abandon sanity all ye who enter here—until you cheer up.

Watching Caligari suffuse his canvas with whatever species of wizardry or variety of delusion possessed him, I decided his methods represented neither imagination abandoned by intellect, nor revelation tempered by logic, but a third phenomenon. He had beguiled both forces into a condition of mutual betrayal, reason convincing fantasy that violent monsters were desirable, fantasy coercing reason into abandoning its tedious allegiance to facts.

Seized by acute panic, Caligari rushed toward the west wall, then lifted the curtain away to create a narrow aperture between velvet and canvas. He dipped his head into the gap. Exploiting the situation, which I suspected she’d deliberately contrived, Ilone reached into her blouse and retrieved from her camisole an apparent duplicate of Caligari’s museum key.

“Herr Slevoght entrusted his secret copy to me,” she whispered, passing me the key. “If Herr Doktor finds it on my person, he’ll be furriest.”

“Furious,” I said, then pocketed the key, wondering whether to betray Ilona’s transgression.

“There’s nothing wrong with the painting.” Caligari stepped away from his magnum opus, letting the curtain slide back into place.

“Perhaps I used the right word first,” said Ilona. “Your picture has on it seven humiliating specks of dust.”

“Have you really seen Ecstatic Wisdom?” Caligari asked her.

“Fräulein, I need a serious answer. If I were to say, ‘Ilona Wessels has never seen Dr. Caligari’s painting,’ would I be telling the truth?”

“Don’t you always tell the truth?”

“Even in its unfinished state, the thing might make you sick.

“You must never look at it.”

The Sorcerer’s House, by Gene Wolfe