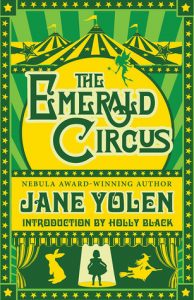 Jane Yolen has been referred to as “the Hans Christian Anderson of children’s literature,” a claim I’m not qualified to dispute. But her unerring ability to transform even the most mundane events, objects, and people into mythic gold is too well-known for doubt, earning—among others—awards such as the Nebula, World Fantasy, Rhysling, and Caldecott Medal. Yolen was the second woman to attain the position of president of the Science Fiction and Fantasy Writers of America.

The Emerald Circus is Yolen’s first collection in more than 10 years. Devoted readers starving for more have 16 tales (including notes and poems original to the collection) in which to lose themselves, including an Introduction by Holly Black, author of the Modern Faerie Tale series.

The novelette-length “Lost Girls” won the 1999 Nebula, and it’s easy to understand why. Neverland’s women, fed up with the Lost Boys’ less-than-fair labor practices, decide to strike: “Peter let the silence prolong itself until it was almost painful. At last he turned and addressed Darla and, through her, all the girls. “What is it you want?” he asked. “What is it you truly want? Because you’d better be careful what you ask for. In Neverland wishes are granted in very strange ways.”

“Blown Away” takes Dorothy and little Toto into realms undreamed of by L. Frank Baum (an Old Man Baum is a puppy-drowning neighbor), but certainly present in David Lynch. This being Kansas, twisters are common, but even those—like Dorothy and family—with marginal good luck eventually get hit. The girl vanishes for nearly a decade, becoming for the extended family a figure of anguished fantasy. When one day “Dottie” returns, she bears evidence of a peculiar cultural reprogramming—and a possibly amorous bearded lady shows up looking for her old circus pal. Yolen notes this tale is “a strange ride.”

The satirical “The Gift of the Magicians, with Apologies to You Know Who” is a response to O. Henry’s famous “The Gift of the Magi,” wherein a post-post modern Beauty finds herself needing a Christmas gift for the Beast—but funds are low. Forced to pawn her magic ring, Beauty selfishly splurges on herself, and finds Beast the perfect gift. But with hunters and plump children safe at home for the holidays, Beast—who enjoys his useful gift—must resort to extreme measures.

Lavinia found her there on the floor in the morning, her dressing gown disordered and her hands over her eyes.

“Emily, my dear, my dear . . .” Lavinia cried, lifting her sister entirely by herself back onto the bed. “Is it the terror again?”

It was much worse than the night terrors, those unrational fears which had afflicted her for years. But Emily had not the strength to contradict. She lay on the bed hardly moving the entire day while Mother bathed her face and hands with aromatic spirits and Vinnie read to her. But she could not concentrate on what Vinnie read; neither the poetry of Mrs. Browning nor the prose of George Eliot soothed her. She whimpered and trembled, recalling vividly the fierceness of that midnight light. She feared she was, at last, going mad.—“Sister Emily’s Lightship”