The Endless Fall and Other Weird Fictions, by Jeffrey Thomas 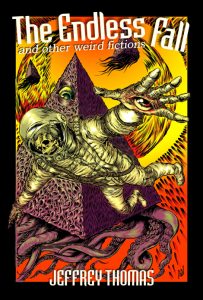 Falling Towards the Weird

Jeffrey Thomas will be familiar to many readers as the author of the Punktown series of stories – scratch that, Jeffrey Thomas is famous among weird and science fiction readers, RPG players, and even comic book fans, as author of the Punktown chronicles of bizarre alien, and occasionally cosmic-horrific, goings-on at that eponymous offworld meeting place for all kinds of races and beings. That’s one very well-realized and – of course, somewhat cyberpunk – milieu, which nonetheless gives little idea of Thomas’s true range. The fourteen recent stories in this collection range far further afield, stylistically and thematically. As Matthew Carpenter explains in his introduction, “you can start with Punktown, but as you begin a deeper exploration of Jeffrey’s oeuvre, you discover … his most consistent theme, real people caught in desperate, bizarre or terrifying circumstances. The Endless Fall could represent the descent to oblivion for the protagonists. It could also indicate the turning of the year, as a summer of promise darkens to the coldness and shadows.”

As Carpenter implies, very few of the stories strike a lighter note. The garish cover may not be to everyone’s taste, but no one could accuse Lovecraft eZine Press of misleading readers as to the content. The nearest thing to a humorous tale is the superhero pastiche “Sunset in Megapolis,” though even there, the rationale and final resolution of the tale are ultimately very bleak. Some stories will be familiar from elsewhere, including the brilliant “Ghosts in Amber,” previously published in 2015 as a chapbook by Dim Shores. Most are disturbing, by and large with a definite note of cosmic horror, though for any Lovecraft fan whose expectations are based on the publisher, it’s important to point out that the only thing approaching a namecheck to another mythos in the entire collection is the evocation of W.H. Pugmire’s Sesqua Valley in the opening story, “Jar of Mist.”

That tale, like many of the others, situate the weird and uncanny in a context of emotional loss, dissociation, isolation, trauma, psychic damage and deprivation. Critics could probably while away hours speculating how far the irruptions of weirdness are concretions or articulations of the emotional and social distress and disease within each story, but the imaginative and poetic continuity is obvious. Beings like the motionless obsidian Spectators, or the everpresent organic cloudbase of “colossal extrusions, boneless appendages” in “Those Above,” are quite haunting enough without any rationale. And some of the tales, like “Snake Wine,” with its Vietnamese setting, or the prison tale “The Dark Cell,” are simply straightforward, brutally well-executed, horror stories.

If you need a taster of the book, Google “Jar of Mist” and “Lovecraftzine,” where that story is available for free online, but trust me, you don’t. Any reader who wants to know how far the New Weird has come in its odyssey from fringe spinoff to full-blown major genre, or how far Thomas has grown from his Punktown roots, should buy this book. Disturbed, intrigued, and moved, you may be – disappointed, you absolutely won’t.

He was the one who had to identify his daughter’s body in the morgue. He was all she had. She had been all he had. His wife, her mother, had hung herself eleven years ago when Aliza had been ten. Oskar had had to identify her body, too. “A Jar of Mist”

Home from the night shift at the factory, Hind looked in on his children before joining his wife in his own bedroom. There were two bedrooms in their chilly little flat, his two sons sharing one of them. Five-year-old Jude lay stiffly on his back in his cot by the door. Eight-year-old Alec was by the single window. The older boy had the quiet handsomeness and straw-colored hair of his father, while Jude possessed his mother’s dark hair and eyes and rounder face. But Hind knew these details by heart more than he actually observed them now. With the boys’ heads inserted into grayish blocks of gelatin, their features were presently hard to discern. “Those Above”

As I interview the person I’m facing it’s hard to believe he can actually see me, and yet he moves his head to follow me as if maintaining eye contact. Brimming from both his eye sockets are thick clusters of long crystals like quartz, but black like obsidian. The whole of my subject’s head, face, and hands appears to be badly burned, with all traces of hair gone from his head, all his exposed skin being charred black and yet also with a strangely metallic aspect, giving his skin the effect of crumpled aluminum foil blackened by fire. Strangely, his clothing is entirely undamaged. “The Individual in Question”