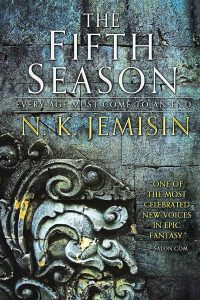 N.K. Jemisin’s The Broken Earth trilogy needs no recommendation. The first book, The Fifth Season, won a 2016 Hugo Award. The second, The Obelisk Gate, is on this year’s Hugo shortlist. The third title, The Stone Sky, is due August 2017. I, like many others, am waiting on tenterhooks to see how it ends.

N.K. Jemisin told John Scalzi how the whole series originated in a dream: “A few years back, I had a dream of a woman doing a Badass Power Walk towards me, with a mountain floating along behind her. I knew she was about my age – early forties, that is – and I could see that she wore dredlocs as I do, but it was very clear in the dream that she was not me. She was angry with me, in fact, because of something I’d done or hadn’t done, and if I didn’t find a way to appease her quickly, I knew she was going to throw that mountain at me. Why was she so pissed off? No idea. How was a mountain following her around like a geological puppy? She was controlling it through some unknown means. I woke up from this dream in a cold sweat – and fascinated. That was the moment the Broken Earth trilogy, of which The Fifth Season is book 1, was born.”

From such dreams stuff is made. But if you think the stuff will be fey and dreamlike, don’t. The Broken Earth is built in raw, literally gritty, detail. There’s a bare, stony flavor to it – this isn’t a China Miéville-style cosmos of madly exuberant invention. But Jemisin’s conception leaves plenty of room for fascinating creations, as well as captivating narrative drama. Levitating obelisks. Animated statues. “Periods of extreme, rapid, hostile climate change” that have left a world barely surviving through a strict regime of crisis preparedness, where comms (communities) maintain storecaches and other emergency measures against the next, disastrous Fifth Season.

One of the few resources humanity has to control and mitigate this world’s ferocious tectonics are the telekinetic mutants known as Orogenes – feared and persecuted, yet also systematically groomed and exploited. Jemisin again: “This woman had a lifetime’s worth of reasons to be angry – like being treated as a second-class citizen and having her hopes for the future crushed again and again. But what kind of society would discriminate against such an obviously powerful person, and why? The trilogy is my answer to that question.” 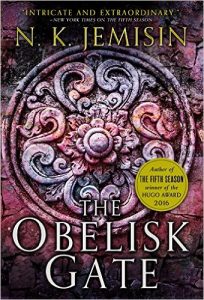 There’s more I’d like to talk about, much more than space allows, but one thing I can’t leave unaddressed is N.K. Jemisin’s own origins as a Person of Color. Is it absolutely essential to the genesis of her story? Yes. Could anyone else have written it? No. Is it necessary to know both background and genesis to enjoy the story? No. Is your enjoyment of it enriched by that knowledge? Yes. Is this a new classic of world-building, absolutely non-escapist fantasy, fully deserving the praise and awards heaped on it? Absolutely.

You’re the mother of two children, but now one of them is dead and the other is missing. Maybe she’s dead, too. You discover all of this when you come home from work one day. House empty, too quiet, tiny little boy all bloody and bruised on the den floor. And you . . . shut down. You don’t mean to. It’s just a bit much, isn’t it? Too much. You’ve been through a lot, you’re very strong, but there are limits to what even you can bear. Two days pass before anyone comes for you. –The Fifth Season

The pain of the strike is sudden and terrible and it breaks Nassun’s concentration at once. This is bad because the sapphire flares as her pain does, flickering into its half-real state and back as she gasps and staggers. This finishes Jija in an instant, solidifying him completely into a statue with a frizz of smoky-quartz hair and a round red-ocher face and clothes of deep blue serendibite, because he wore dark clothing in order to stalk his daughter. This statue stands poised for only an instant, though – and then the flicker of the sapphire sends a ripple through him like a struck bell. Not unlike the concussion of turned-inward orogenic force that a Guardian once inflicted on a man named Innon. Jija shatters in the same way, just not as wetly. -The Obelisk Gate

The Season of Teeth: 1553-1566 Imperial. Proximate cause: oceanic shake triggering a supervolcanic explosion. Location: Arctic Cracks. An aftershock of the oceanic shake breached a previously unknown hot spot near the north pole. This triggered a supervolcanic explosion; witnesses report hearing the sound of the explosion as far as the Antarctics. Ash went upper-atmospheric and spread around the globe rapidly, although the Arctics were most heavily affected. The harm of this Season was exacerbated by poor preparation on the part of many comms, because some nine hundred years had passed since the last Season; popular belief at the time was that the Seasons were merely legend. Reports of cannibalism spread from the north all the way to the Equatorials. At the end of this Season, the Fulcrum was founded in Yumenes, with satellite facilities in the Arctics and Antarctics. – “Appendix 1: A catalog of Fifth Seasons that have been recorded prior to and since the founding of the Sanzed Equatorial Affiliation, from most recent to oldest”