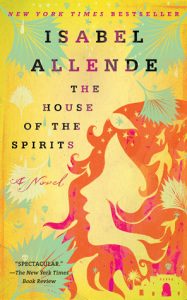 The House of the Spirits is a classic, magical realist epic, somewhat in the style of Garcia Marquez. The story follows the Trueba family, living in an unnamed South American country, presumed to be Chile in the years leading up to and following the 1973 coup that brought Pinochet to power.

Written in a populist, romantic style, almost verging on soap-opera, the complicated, non-linear narrative begins full of magic, spirituality, love and sex. The stories center around Clara, who communicates with the dead and has premonitions of the future, her daughter Blanca, and granddaughter Alba.

This is a book about these women’s strengths and trials: personal, spiritual and political. Clara, independent and eccentric, takes life and death on her own terms. She proposes to Esteban, based on her vision of the future, but she never acts as a traditional wife. Esteban’s sister Ferula falls in love with Clara, risking the ire of her brother. Blanca carries on a secret affair with a laborer turned revolutionary. Alba, is called the “lucky,” child. Magical and beloved by all, she also goes on to join the revolutionaries. Even the prostitute, Transito Soto creates a successful, independent life for herself by bringing her dream to fruition: establishing a cooperative of prostitutes and homosexuals. When Alba is in prison, a community of women sustains her.

Toward the end of the novel, the style becomes more realist, exploring the horrors of the political situation in a country ruled by a violent dictator. The sense of unreality then comes from the effects of propaganda and the horrors of fascism, which are related in great detail. The only magic that remains are the stories from Clara’s journal, used by Alba to alleviate the horror of political repression, through entertaining children whose mother has gone insane in prison. Clara, though dead, appears to Alba and encourages her to write stories in her mind (since she has no pen and paper) as an act of political dissent, and to help her stay sane through the brutal torture she must endure.

This magical realist novel demonstrates a balancing act, between the magical and the all-too-real, feminism and misogyny, freedom and repression, cruelty and kindness, life and death. In The House of the Spirits what goes around comes around, full circle.