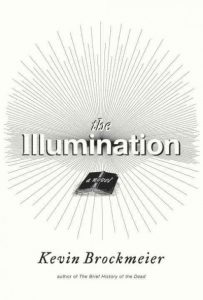 The Illumination is a literary novel with only one fantastic element, but it’s a doozy: one day, inexplicably, the bodily pain of each and every human being on earth begins to manifest as a white light. Everything from a headache to leukemia shines out of the body like a beacon for all to see.

The story follows a sequence of people who come into possession of a journal of love notes, transcribed by a woman named Patricia, from the notes her husband left her on the fridge every day of their marriage. She and her husband get in a car wreck just before the phenomenon called the Illumination begins. Thinking that her husband is dead, grieving and fatally injured, Patricia gives the journal to her hospital roommate, Carol Ann.

Carol Ann has landed in the hospital after she accidentally sliced off the tip of her finger. After a day or so, she realizes that she is not hallucinating the white light streaming from her fingertip; nor is the phenomenon hers alone. Her doctor says “Funny how quickly a person can get used to a miracle… if that’s what this is. The problem is, we’re in a hospital. Not exactly and environment conducive to quiet reflection.”

But it seems that perhaps the entire world must be “an environment not conducive to quiet reflection.” Once people have adjusted to the fact of the Illumination (including the naming of it) they politely pretend they can’t see the anguish blatantly displayed by one another’s bodies, and life continues pretty much as it did before.

Given that, the journal seems to take on a greater significance. It is perhaps everything the Illumination should have been but isn’t. The love to balance the pain.

Each person who comes into possession of the journal ponders the people who wrote and received the love notes (even Jason, the writer of the notes, ponders the man he was when he wrote them), and the existence of such an object in relation to themselves.

Once a character’s time with the journal is done, we leave them: Carol Ann with her cut finger and malicious ex-husband; Jason, the writer of the love notes, who falls in with a group of self-mutilating teens as a way to cope with the unbearable loss of his wife; Chuck, the emotionally abandoned, savant boy who sees life in inanimate objects and steals the journal to protect it from harm; Ryan, an uninspired missionary; Nina, a writer with chronic pain; and Morse, an emotionally disturbed homeless man who sells books on the street.

Each character’s story is compelling, though naturally I found some to be more so than others. There are no tidy endings to the individual stories, but cumulatively they build to a meditation on the metaphysical nature of human suffering.

This is not a novel that lends itself to easy readings. But for me, despite the flashy premise (pun!), The Illumination is at heart about the search for the profound in the mundane. The goofy, sweet sentiments expressed in the journal bear this theory out. For unlike the rest of the prose in this novel, which is gorgeously crafted, poetic without being ostentatious, and clearly the work of a master, the love notes taken from the journal seem entirely realistic, thoughts and observations that could have been written by any husband: odes to the beauty of small, personal moments whose significance and pathos transcend language.