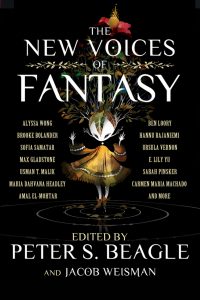 By the time Aiko leaves, her footsteps echoing down the hallway, I’ve dug deep gouges in the door’s paint with my nails and teeth, my mouth full of her intoxicating scent.

The key word in this anthology’s title is new, and if that doesn’t quicken your heart, a sampling of the impressively diverse voices will. Editors Beagle and Weisman, both top-tier in their own right, seem to have absorbed the generous reach and flexible sensibility of Ellen Datlow who—like them—knows that a writer’s name and/or present level of accomplishment have little to do with storytelling. No one needs to be reminded that common expectations of plot and originality crumble into ash when handled by masterful writers.

After Weisman’s Introduction and Beagle’s thoughtful “Back Then,” Alyssa Wong’s “Hungry Daughters of Starving Mothers” explores with fierce insight a particular hunger so fraught with emotion, and the consequences for their repression and denial, mere “vampire fiction” is rendered laughable. This mother and daughter are beyond wounded—they are wounds, and the method by which they cope (although that might not be the appropriate term) must be visualized for full effect. Torturers become the tortured.

Brooke Bolander’s “Tornado’s Siren” takes synchronicity and turns it into fate—or is that simply one way to interpret what appears to be intervention from nature’s most violent storm? Bolander’s seamless fusion of fairy tale-like magic, the “innocence” and alienation of small towns, and how that can cause some to step into the unknown, could be an anthem to loneliness and a warning against dehumanizing those “out of step” with so-called normality.

A.C. Wise’s “The Practical Witch’s Guide to Acquiring Real Estate,” could be considered a playful (but insightful as hell) riff on Kelly Linkian storytelling, but the comparison ends there. “Furthermore, breeding a house takes a strong constitution, and the utmost hard-heartedness from a witch. Consider carefully—could you drive iron nails through the skin of a child you held in your arms, even if it was for the child’s own good?” Are we owners, or are we owned?

Hannu Rajaniemi’s “The Haunting of Apollo A7LB” gives us intimate knowledge of a little-known historical reality: the isolated lives of women employed by NASA to assemble—with exhausting labor and precision—the incredibly complicated spacesuits vital to keeping alive the astronauts who wore them. This might very well be a ghost story, or an allegory on deathless desires. Hazel wanted not only to play a role in the space program—she wanted to go into space. But even the most loving astronauts eventually followed their egos instead of their hearts: “He only stopped coming when they made him commander on the fourth mission to the Moon. An astronaut and a black seamstress. That was the way it had to be. He married his high school sweetheart a year later.”

I once heard a story about a girl who requested something so vile from her paramour that he told her family and they had her hauled her off to a sanitarium. I don’t know what deviant pleasure she asked for, though I desperately wish I did. What magical thing could you want so badly that they take you away from the known world for wanting it?—(“The Husband Stitch” by Carmen Maria Machado)