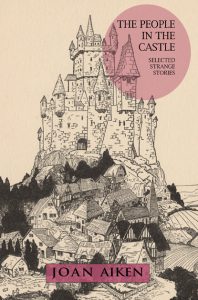 Joan Aiken, over 50 years and more than 100 books for adults and children, mixed elements of the supernatural, folklore, fairy tale, and alternate history spiced with mordant humor in a style worthy of applause from Strunk and White. For readers unfamiliar with Aiken’s work, its ice-and-stars clarity, naturalism, and unerring dialogue can be described as hypnotic: “Empty and peaceful the old house dreamed, with sunlight shifting from room to room and no sound to break the silence, save in one place, where the voices of children could be heard faintly above the rustling of a tree.” [from “A Room Full of Leaves.”]

Aiken was a lifelong fan of ghost stories by M.R. James, Henry James, Nugent Barker and similar others, and her textured prose certainly evokes dread and the uncanny, but there is a third aspect that can only be called “glamour” or enchantment. Easy comparisons to Shirley Jackson and Bradbury have been made, and Aiken’s fabulism (at least in my opinion) is of equal caliber, but less claustrophobic.

“Humblepuppy,” a gentle tale about pets and our love for them, opens with absurdity and becomes a reflection on loneliness and how household familiars—despite our egotism and temperaments—often connect us with other people.

Young Tessie in “She Was Afraid of Upstairs,” with her terror of upper rooms, is a complete mystery to everyone, until a health crisis forces her hand. Here the tension builds and builds into an ending both inevitable and shocking.

Mrs. Minser and her elderly boarders, in “The Man Who Had Seen the Rope Trick,” fear Mr. Ollendod, the new “foreign-looking” resident and his collection of exotic artifacts. Mrs. M’s Jenny and Martin, though, are enthralled by his stories and shawl-covered mirror. When the fed-up landlady meanly evicts Mr. Ollendod, he exacts strangely appropriate revenge.

“The Mysterious Barricades” chronicles the Calvinoesque adventures of a stranger on a bicycle looking for his stolen sheet-music and canary. Directed by a village woman into snowy mountains, the traveler encounters visionary denizens, recovers his loss, and enters (or does he?) an otherworldly realm.

“Why won’t you go, Tessie? What’s the matter with upstairs? There’s nothing bad up there. Only the beds and the chests-of-drawers. What’s wrong with that?”

And Aunt Sarah used to say, laughing, “You’re nearer to heaven up there.”

But no, Tessie’d say, “It’s bad, it’s bad! Something bad is up there.” When she was very little she’d say, “Darkwoods. Darkwoods.” And, “Grandfather Moon! I’m frightened, I’m frightened!” Funny thing that, because, of the old moon itself, a-sailing in the sky, she wasn’t scared a bit, loved it dearly, and used to catch the silvery light in her hands, if she were out at night, and say that it was like tinsel falling from the sky.