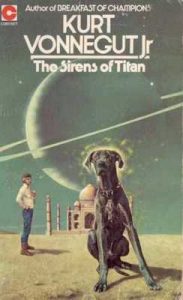 I’ve read quite a few of Vonnegut’s novels now, and I’ve decided he is, in fact, an alien observer of a strange and dangerous race: humans.

Vonnegut’s stories show us our every shortcoming without rancor. Like a good anthropologist, he’s neither angry nor particularly compassionate. He doesn’t make excuses about how some of us have our hearts in the right place, but are undone by this group or that group. He simply observes and reports.

You might think his dispassionate narration is a stylistic decision but I’m pretty sure it’s not. Under Vonnegut’s impartial gaze, humanity as a whole has been fairly assessed — and found desperately lacking.

So thoroughly did The Sirens of Titan expose our collective failings, a thoughtful reader might be forgiven for falling into a nihilist funk and concluding that we should be done away with as a species, immediately and for the greater good.

The one redeeming factor, the only finger in the leaking dyke of our despicability is the power of friendship and loyalty. Unfortunately this is demonstrated by only three of the main characters in the book, and one of them is a robot.

The novel does not leave us without a beacon that might lead us out of the darkness, however. That beacon is found in the prologue. Here the narrator, speaking presumably from the future, informs us:

“Less than a century ago men and women did not have easy access to the puzzle boxes within them…Mankind, ignorant of the truths that lie within every human being, looked outward—pushed ever outward…These unhappy agents found what had already been found in abundance on Earth …empty heroics, low comedy, and pointless death…Outwardness lost, at last, its imagined attractions. Only inwardness remained to be explored. Only the human soul remained terra incognita.This was the beginning of goodness and wisdom.”

Though Sirens depicts a technologically advanced culture capable of deep space travel, multi-dimensional beings, and super-intelligent machines, the morals and behavior of humans still reflect all the bumbling evil and poor judgment of a people with “their souls as yet unexplored.” Sound familiar?

Many people call this science fiction; I call it metaphysical fiction.  We have seen the enemy and they are us.

Though this Hugo Award nominated novel was published in 1959, it is a spiritual call to action that is as relevant today as it was then. Technology, or as Vonnegut puts it, “pushing outward” will not save us; our only hope is to journey within.