“DID YOU HEAR?” Ralph said.

“They put out the green shit.”

“How the fuck could he do something that stupid?”

“That if you eat just a little bit, just the right amount, it’s the best high ever.”

“That if you eat exactly so much and no more, it’s this intense rush, it opens up your mind—”

“The fuck you’re saying. Your mind?”

“He’s sitting down at God’s feet, and he’s saying, ‘Hey, God, why does this green shit that kills you taste so good? And while we’re at it, why did you make those giant fucks who try to sucker us into eating it?’”

“That’s what that green shit does to you.”

“And how the fuck did you see it?”

“Yeah. They found him under that smaller thing they use for a nest—”

“How many fucking nests do they need?”

“—they were wiping the floor with that big thing that makes all the noise, and they picked up the smaller nest, and there he was. All still, his tail curled around him, looked like he was sleeping.”

“The guy starting making some noise, and the girl made a lot of noise. They got all excited and started running around. Then they got something and scooped him up and put him in a bag and took him outside.”

“Where was the cat?”

“The cat. Where was the fucking cat?”

“The cat’s gone. Hasn’t been around for ages.”

“It never touched us, though.”

“Goddamn right it didn’t. All ferocious and shit, but all you had to do was rear up and squeal as loud as you could and it backed right the fuck off.”

“True. It really took out the mice, though.”

“Mice! Useless little fucks. Think they’re so little and cute they can get away with shit. Fuck ‘em.”

“Where was the dog?”

“Louie had been lying there dead under that thing for how long and the dog didn’t notice?”

“Figures. At least the cat did its job, more or less. Did I tell you about the time I ran right past the dog?”

“I ran right past it, and nothing. The cat would have at least chased me, but the fucking dog just lay there snoring.”

“Well, it sure didn’t do anything to Louie. Poor Louie.”

“We ought to rise up and take them out!”

“If there were enough of us, we could do it.”

“Rise up and take them out.”

“Didn’t you tell me that story about way before, a long-ass time ago, how we killed millions of them? Not even biting, we just made them sick or something?”

“That was thousands of generations ago. Those are just stories.”

“Eating the green shit and seeing God is a story. Killing the giants is fucking history.”

“But there’s not enough of us.”

“Not now. But maybe. It would help if it wasn’t just this place.”

“We need something bigger. Just a place like this, who wants to live here besides sad fucks like you and me?”

“I don’t know. It’s warm. They drop enough food to keep us going.”

“If only we had a barn. Then we could build up some numbers.”

“I’m totally right. You got a barn, motherfuckers’ll show up.”

“No. We don’t. But it doesn’t take a lot of us to fuck with them, at least. You know what Louie told me once?”

“He said he got into their main nest once—the thing they sleep on?”

“No, really, he did. He was in the nest with them and he said he got close enough to the guy’s dick that he could’ve bitten it off.”

“You know, I always wondered about Louie.”

“I mean, there he was in their nest with both of them, so he’s got this giant pussy lying right there—”

“—and all he can talk about is the guy’s dick?”

“Shut the fuck up! Show some respect! He’s dead, for fuck’s sake!”

“What respect? What if he had gone after the guy’s dick? Nothing wrong with that.”

“What’s the matter with you?” 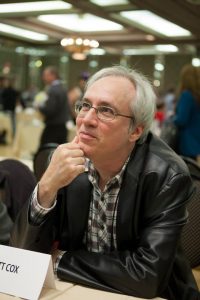 F. Brett Cox’s recent publications include fiction in Eclipse Online, Shadows and Tall Trees 2014, and War Stories, poetry in IthicaLit, The Lake, and Exit 13, and a monologue in Geek Theater.  His story “Maria Works at Ocean City Nails” (New Haven Review) was included in the anthology Best Indie Lit New England Vol. 2.  With Andy Duncan, he co-edited Crossroads: Tales of the Southern Literary Fantastic (Tor, 2004).  He serves on the Shirley Jackson Awards Board of Directors and is a member of the Cambridge SF Writers Workshop. A native of North Carolina, Brett is Professor of English at Norwich University and lives in Vermont with his wife, playwright Jeanne Beckwith.