Waking the Moon, by Elizabeth Hand 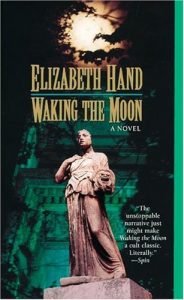 The Moon with a Knife-Sharp Edge

Three unwitting college students stand between the reawakening of a dark goddess and the Benandanti, a secret society of magicians who have been running the world for thousands of years.

Waking the Moon, which won a Mythopoeic Award and a James Tiptree, Jr. Award, is part horror, part coming of age story, and part romance. Chock full of arcane lore that draws from prehistoric matriarchal cultures, the aspect of the goddess portrayed is more akin to Yeats’ rough beast slouching toward Bethlehem than Quan Yin or Mother Mary.

The novel centers on Catherine Sweeney Cassidy, just entering college in Washington D.C. at the University of the Archangels and St. John the Divine. Attending her first class (Magic, Witchcraft & Religion), Sweeney is gob smacked by the stunning Angelica di Rienza, and the brilliant and bizarre Oliver Crawford. To Sweeney’s surprise, these two charismatic creatures seem drawn to her, as well.

Things at The Divine quickly go weird. At a legacy soiree that Sweeny crashes, the Benandanti learn that one their own, archeologist Magda Kurtz, has betrayed them. She has secretly been in possession of a silver lunela, an ancient artifact with great power.

Knowing that she’s toast, Magda bestows the lunela on Angelica, just before the Benandanti toss her through a portal into a dark wasteland inhabited by giant insects—a murder witnessed by both Angelica and Sweeney.

Although the Benandanti know Angelica has the lunela, oddly, they do nothing to stop her. They hope she will be distracted and disempowered by the scion, Oliver—bred, it seems, for just this purpose. It seems an oddly ineffectual strategy for men purported to be the puppet masters behind the last several thousand years of civilization (yet on a metaphorical level it certainly works – plenty of women have sacrificed their power to beautiful men, and the attendant dream of domestic bliss).

Oliver and Angelica soon become a couple. Sweeney, in the roll of lovesick sidekick, follows Oliver on his psychedelic meanderings around the city during the day, and into all night bouts of drinking and dancing.

As Angelica transforms into the goddess Othiym Lunarsa, she learns to wield the lunela, a crescent shaped necklace with a knife-sharp edge. Oliver, caught between his roles as consort to the goddess and Benandanti mole, falls apart. The situation comes to a head at a university-sponsored retreat in the country, as Sweeney and her friends helplessly witness the ritual debauchery that kicks off the next phase in Angelica’s transformation. In the fallout, Sweeney is expelled from The Divine, and Oliver is destroyed.

The characters in Waking the Moon are complex. There are no clear-cut villains here; even the bloodthirsty Angelica, under the sway of the lunarsa, may be seen as a pawn of forces beyond her control, or conversely, as an eternal being beyond human morals and comprehension. For example, one of Angelica’s sacrificial victims experiences a joyous merging with the goddess as he dies, raising the metaphysical concept that what may appear abominable from a human perspective may appear quite different from the other side.

Likewise, the Benandanti, who initially seem to be your typical ruthless, misogynistic, secret society lurkers, must be regarded in a somewhat different light when the goddess whose return they have sworn to prevent turns out to be a bit of a serial killer.

Fantastical elements notwithstanding, Hand creates a realistic portrait of college life, the effects of first love (both devastating and transcendent), Sweeney’s subsequent life as an introverted civil servant working at the Museum of Natural History, and her reawakening into a fierce new love. It is Sweeney’s voice that carries the story. She seems haunted, not so much by the bizarre events at The Divine, but by the love and loss of Angelica and Oliver.

Things begin to unravel a second time when Sweeney’s old friends from The Divine start turning up dead, one by one. Despite her distrust of the Benandanti, Sweeney finds herself stepping into the role they have planned for her, in order to try and save yet another beautiful young man—the strange fruit of her love triangle with Angelica and Oliver so many years before.

Beautifully written and highly entertaining, by turns romantic and lyrical, blood-thirsty and ferocious, Waking the Moon draws its mythology from classical texts of ancient goddess civilizations, as well as historical works about the real Benandanti. From these foundations it leaps off the cliff to create an original vision of the re-emergence of a dark goddess.