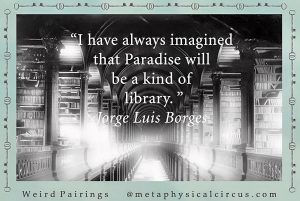 The Quote: Jorge Luis Borges was an Argentine writer who was postmodern way before postmodernism was a Thing. He was writing magical realist stories just as magical realism was becoming a Thing. He started his writing career publishing in surrealist literary journals when surrealism was The Thing. This places Borges front and center of nearly every interesting literary movement in the 20th century.

Since then, Borges has influenced legions of writers of the fantastic, weird, magical realism and science fiction. William Gibson, in his introduction to Labyrinths said, “Had the concept of software been available to me, I imagine I would have felt as though I were installing something that exponentially increased what one day would be called bandwidth.” Borges was also a librarian.

The Image: This is an old photograph of the Long Room in the Library of Trinity College in Dublin Ireland, the largest single chamber library in Europe. The first floor of the Long Room was designed by architect Thomas Burgh and constructed between in 1712 and 1732. A hundred years later, since Trinity College Library is legally entitled to a copy of every book published in Great Britain and Ireland, the library was running out of space. Architects Benjamin Woodward and Sir Thomas Deane came up with the sublime plan to barrel-vault the ceiling and add an upper gallery of bookcases. When Borges said that Paradise was a kind of library, he might just have had something like this in mind.

If you like having your brain bandwidth expanded, pick up the short story collections Ficciones, Labyrinths or The Aleph. Borges’ highly literary, genre-defying stories demonstrate a fascination with some of The Metaphysical Circus’ favorite things like labyrinths, mirrors, chess games, time, memory, detective stories, fake texts, and of course, libraries.

If you want to learn more about the writer, check out this article from the BBC which asks, “Is Borges the 20th Century’s most important writer?”