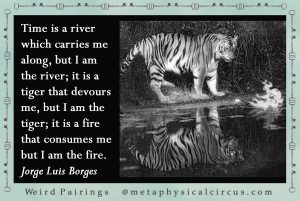 The Quote:  “Time is a river which carries me along, but I am the river; it is a tiger that devours me, but I am the tiger; it is a fire that consumes me, but I am the fire. ”
Borges battled the notion of time both in his fiction, such as “The Garden of Forking Paths” and in philosophical essays such as, “A New Refutation of Time,” where he proposes that idealism may be applied to time. In other words, that reality as we perceive it is fundamentally mental or spiritual, not physical.

The Image: Collage by Sophia Hermes. “The tiger is reflected in the river. Can we truthfully say that one is more real than the other? The flame emerges from the water, a union of opposites, an impossibility that hints at realities beyond.”