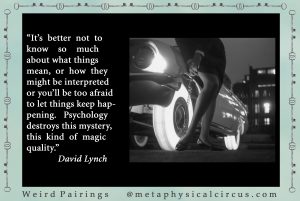 We will take quotes from masters of the metaphysical, the fantastic and the weird, and pair them with images that interact with the quote in ways we find strange, enigmatic, beautiful or surreal. We’ll tell you a bit about both the writer and the art, and offer links for those who must know more.

For Our first Weird Pairing, we couldn’t think of a better candidate than the master of the mysterious weird, the sultan of surreal: writer, filmmaker and visual artist David Lynch.

The Quote: Lynch is giving advice to his fellow artists and writers not to over-explain their imagery and obsessions. He believes that to oversimplify the irreducible complexity of life and art can put a cork in the wellspring of creative energy. Of course, this may not be true for all creators, but it bears consideration. Thanks to the legacy of Freud, we tend to think every last impulse, passion and neurosis can and should be dissected and analyzed, denuded in dismissive glare of rationality. Carl Jung and David Lynch disagree. How about you?

The Image: At first glance it looks like it could have been a still from one of Lynch’s films. However, it is actually a 1960’s era advertisement for luminous tires. Proving Lynch’s theory that over-explaining can rob the mystery, I found the photo less intriguing once I knew that it was just an ad. Maybe someone should write it a story full of doppelgangers and double-crossing, innocence menaced by evil, coffee and pie, mystery and metaphysical cowboys, to re-infuse it with some of that beautiful dark weird Lynchian magic.

Of course you do! For those of us who’ve been missing our Lynch fix, there is light at the end of the tunnel: new episodes of the 1990s surreal noir TV series Twin Peaks slated for 2016! Before there was Lost or any of the other genre busting TV shows that followed, there was Twin Peaks. Sadly, it was cancelled without a resolution to the story. Lynch threw together a cliffhanger episode and it’s been hanging for over twenty years. Just 2 years to go? You can bet we’ll be geeking with the best between now and then.
If you love weird, fantastic and surreal art but have yet to delve deeply into the world of David Lynch, you’re in for a treat. Run don’t walk to watch his films. Start at the beginning, with his early masterpieces, Eraserhead and Blue Velvet and work your way forward from there.
If you want to read about Lynch, including what he’s been up to recently, check out these recent articles in the L.A. Review of Books:
Johnathan P. Eburne, “He Has His Tools and Chemicals: A David Lynch Retrospective”