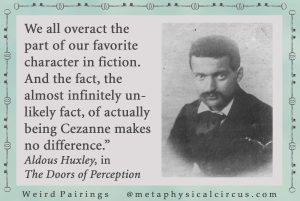 About the Quote: This delicious quote is from The Doors of Perception (from which the rock band took their name), a non-fiction book that records Huxley’s experiences while taking peyote in a controlled setting, and his subsequent meditations on the nature of reality and human perception. In two sentences, Huxley manages to convincingly blur the lines between reality and art, plus skewer our fondly held notions of fixed identity. Huxley saw that we all just slip into ourselves the way we pull on a suit of clothes. Though few of us wish to be seen in public without these very human props, the truth of our natures lies at least partially obscured beneath.

About the Image:  This photograph of the French painter Paul Cezanne was taken in 1861. The intensity of his eyes and the slight smile on his face seem to indicate both seriousness and an understanding of the grand metaphysical joke: we are what we are, and we are much more than we are. There is no way on earth to avoid the absurd dichotomy. We must put on the suit of our identity and play our part to the hilt.

Want More? Aldous Huxley was an influential twentieth century writer of humanistic, utopian and dystopian science fiction, satire, screenplays and non-fiction. He was also an outspoken pacifist who studied meditation and mysticism. His books remain as relevant and radical today as when they were written. Other notable works include Brave New World, Eyeless in Gaza, and Island.

Bonus Quote: “Nobody needs to go anywhere else. We are all, if we only knew it, already there.”