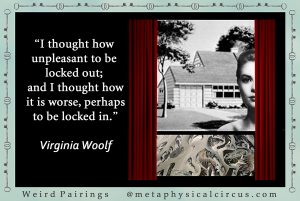 The Quote: Virginia Woolf was a modernist writer of the 1920s, responsible for books such as The Waves, an experimental, lyrical stream of consciousness novel, and Orlando, in which the hero lives several centuries and becomes a woman for a time. Woolf also collaborated with her husband Leonard in founding Hogarth Press, which published her works as well as work by other notable authors and artists of the day. Despite frequent bouts of depression, Woolf never stopped writing. Feminist, bi-sexual, a novelist and a publisher. One of our heroes.

The Image: The collage is by reclusive French artist, Sophia Hermes. “Like my heroes Remedios Varo and Leonora Carrington, my art blossomed when I moved to Mexico in the 1960s. It’s not that I shun society, but that I have found a refuge among the bougainvilleas.” Hermes’ collages illustrate The Evolution of Reptilian Handbags by Melanie Lamaga. Her tiny surreal mosaics, most of them unsigned, can be found in restaurants, coffee shops and public squares in Ensenada, Mexico.