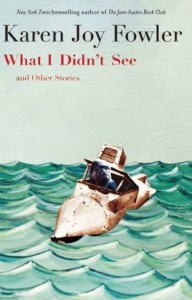 Karen Joy Fowler is one of the writers who, to me, exemplify the literary fantastic. Her stories crack the shell of history, looking for strange and beautiful pearls. The fantastical elements always seem entirely probable, if mysterious, and serve to deepen our understanding of the human condition. Her writing style is transparent and smooth as silk, many of the stories haunting and emotionally resonant.

This collection begins with “The Pelican Bar,” about a teenage rebel sent away by her parents to a re-education camp run by people who may be aliens, or may just be cruel. The intensity of this story is such that by the time the main character emerges out the other side of her ordeal, you may feel as altered and uncertain, broken yet powerful and somehow hopeful, as she.

“Booth’s Ghost” was another standout for me. This story is not about John Wilkes Booth, but his family, especially Edwin, It covers the time before, during and after the assassination of Lincoln, and reads like something out of an artful historical novel or at times even a history text (except for the ghosts). The matter of fact tone and almost epic structure made it seem as if we are skimming along the surface of this family’s life until the end. The impact of the assassination on the family was profound, as they are accused, some imprisoned and nearly ruined for the actions of John Wilkes. The ending strikes a chord of such unexpected depth that it brought tears to my eyes.

“Standing Room Only” is another story that swirls around John Wilkes Booth, this one detailing the events just before the assassination from the perspective of Anna Serrat, daughter of Mary Serrat, one of Booth’s co-conspirators.

“The Last Worders,” which I read years before in Lady Churchill’s Rosebud Wristlet, held up well for me. This tale of twin sisters traveling to a town called San Margais, to find the boy they both loved and renounced back in high school, to finally bring their crush to a resolution and see which one he will pick. The details of the town and history of San Margais charm and fascinate. Fowler perfectly captures the feeling of traveling in Europe by train, and the relationship of the sisters. This story doesn’t go where you think it will; Fowler’s stories never do.

“Private Grave 9” was a lot of fun and reminded me a little of The Idol of the Cyclades by Julio Cortazar. When an Agatha Christie-type mystery writer shows up on an archeological dig in Egypt to observe and take notes for her next book, the narrator, a photographer, finds himself harboring unexpected, murderous thoughts. Is it the annoying writer or the mysterious face that appeared in one of his photographs that is to blame?

“What I Didn’t See” appears to be sort of homage to “The Women Men Don’t See” by James Tiptree Jr. This is the story of a group in the late 1920s who go to hunt gorillas in Africa, including the first two white women who will ever see the gorillas. Narrated by one of these women many years later, this is a powerful story of hidden agendas, secrets, and the lengths to which women have had to go (and sometimes still do) to be free.

These were my favorite stories in this collection. There are six more, some more successful than others, in my opinion, but all well written and worth reading. Reading these stories is like opening a dusty old history book and seeing an alien or a phoenix pop out. Instead of a dry recitation of facts, you get a window into the very human heart of the past – the parts we can explain and those we can’t.