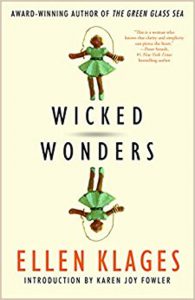 “We had not planned for children,” Mission Control’s message ended. “We’re sorry.”

With the deeply moving “Amicae Aeternum,” Klages pays homage to and equals Bradbury, but absent the ever-present sentimentality which sometimes blunted the effect of his short stories. A small-town girl sneaks from home and, walking the neighborhood, inventories objects, textures, and other common sensory details. Pausing at her best friend’s home, the two ride bicycles through pre-dawn hush to a park. Klages’ vivid, but unobtrusive, prose charges the story with immediacy, flowing as naturally as the gurgling creek into which the girls ease their feet. Only in the last paragraphs do we realize the purpose of this clandestine tête-à-tête, and its crushing sadness. Some of us weep not because we’re not celebrities, musicians, poets, or exciting explorers—but because we don’t want to be, and earthly life is all we need.

“The Scary Ham” is from another place entirely—the author’s actual life. Read and enjoy but, as noted by author William Gibson, distrust that particular flavor.

In “Caligo Lane,” Franny, “cartographer by trade, a geometer of irregular surfaces,” through the lonely nights uses available tools to save lives, the fog her agent of topological alchemy. Despite knowing that transferring the world to a map is both magic and art—folding has two possibilities, unfolding only one—can this heal her own very personal loss? Anyone who’s visited the Russian Hill section of San Francisco will immediately recognize Number 67’s bay window and copper-domed cupola. Klages bends the seemingly impossible into angles as unexplainable and alive as the emotions that complicate and, if we’re lucky, keep us together.

In the early ’90s, my father’s brother gave him a Christmas present, a ham. Not the kind in a can, but a full-sized southern-style ham. A Smithfield ham. They are supposed to be aged a bit before serving, hanging for six months or a year in a dry Virginia smokehouse.
My father hung his in a damp Ohio basement.
For twenty years.
It hung in a corner of the room that held odds and ends, boxes and plastic bags of foam peanuts. When I was a kid, and we had a cat, it was the room that held the cat box and cat litter.

I had studied Mars for more than twenty years. I wasn’t prepared for how eerily beautiful and utterly alien it was. Everything was shades of reddish brown, no greens or blues. The horizon was too close, the sky too uniform, the lighting flat. Daylight was butterscotch, as if it were always afternoon, half an hour before dusk. At night, the two small, lumpy moons rose into the starry blackness, Phobos slowly in the west, tiny Deimos in the east.
The first seedlings were unfurling in the hydroponic tank when my water broke.