"He chose her to live over Maggy. That’s the kind of grace that won’t surrender, that arrives on the tiniest, unwanted wheels." 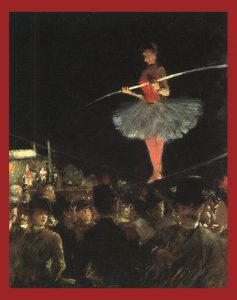 MY GIRLFRIEND JULIA WAS the daughter of a cabinet maker from Minnesota. She grew up reading more books than her parents had ever read. Her mother, a stay-at-home mom, still shopped at the shopping center near their house. Julia liked rain and played in it as a child, never catching cold. She imagined she was invincible. Grace comes to families like that, who seem so unsuspecting, but it comes on bitter, tar-caked roller skates.

Julia went on the road when she was eighteen, with her best friend Maggy. They traveled across the United States like they were maple leaves in a pond that pushed out and down into streams. They ate at diners, stole donuts from the back of bakery delivery trucks, hitched rides with men older and fatter than their fathers. If you never did this yourself, don’t read about it now. You will only feel longing. If you did this, of course, you will feel longing, too.

It’s like this. The tight rope walker sees only the tight rope. There is no ground below, no lion in the periphery, no audience. You cannot fall off of a line if the line is everywhere you look, if all you see is the line ahead of you.

They were this way, at first, Julia and Maggy, traveling a single spinning line, only it appeared behind them instead of in front. They saw where they had gone, and they sat, admiring the fist of flowers they had touched and tasted, the knot that was known as California, at the end of their rope.

They could have stayed, but they decided to return East. On I-70 outside of Limon, Colorado, where the state turns flat and begins the endless plane through Kansas, they rested by the side of the road, waiting for their thumbs to lure in a catch. The wind was strong, like it had traveled for hundreds of miles and had hundreds of miles to go.

Maggy’s father sold business machines and put a hundred thousand miles on his car a year. Julia wondered if they would run into him, she almost hoped it, though Colorado was way out of his region. He stayed around the great lakes. She sang a song that had been on the radio that morning, in the car leaving Denver, near the trains they found but were too scared to leap on. She sang, “Oh Canada-ah!” But she was thinking only of home, and home, with its capital H, was blurring the lines of the rope in front of them.

They were taken in.

You can imagine a hundred stories. We’ve seen something just like it on t.v., but never felt it ourselves. If you want to take a quiz, answer this here: is it worse to be Maggy, being severed with an old war machete, until you bleed to death, or lucky Julia, my lover, watching her friend be taken apart. Or to be the one who found the limbs, strewn like chicken bones amongst the prickly-pear, by some peyote hunter or ex-Marine. Or would you want to be Maggie’s folks, alive, experiencing nothing directly, safe in their Minneapolis suburban house, their lives forever stained, like clothes splashed with thimbles of wine.

We all believe we are angels or Christs when we’re small. If we read the right things, we become the heroes of our lives. It’s nothing special, it’s only us imitating books.

Julia can’t explain it. Once upon a time. . . He chose her to live over Maggy. That’s the kind of grace that won’t surrender, that arrives on the tiniest, unwanted wheels. He grew suddenly weary of butchering and took off in his van. By accident, then, Julia became the hero, which is how heroes happen. Still, flash bulbs and cameras with eyes the size of shark throats circled her with flames. There was still blood on her blouse, blood that wasn’t hers, blood that he had dribbled on her after his spell in the desert.

Drops of her, Julia thought, before she could stop herself. And when Julia, what part of her was left, got home, she took up in a house and waited for her own hero. She only read books after others had read them first and told her they were safe. She wanted only to hear language that reeked of the familiar. It was years before I could touch her.

Nathan Alling Long’s stories and essays have appeared in over a hundred anthologies and journals, including Glimmer Train, Story Quarterly, The Sun, Tin House, Salt Hill, Camera Obscura, Indiana Review and Crab Orchard Review—as well as on NPR. He has received a Truman Capote Fellowship, a Mellon Foundation grant, and two Bread Loaf Conference work scholarships, and his stories have been nominated for a Pushcart Prize and Best Non-Required Reading award, as well as been finalists nine times for the Glimmer Train Very Short Story Award. He teaches at Richard Stockton College and lives in Philadelphia, PA.

Beyond Lies the Wub