You’ll Know When You Get There, by Lynda E. Rucker 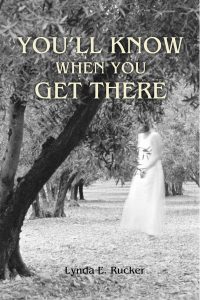 Arriving at the Unknowable

Lynda E. Rucker has built a reputation as one of the more significant talents of the new generation of weird and strange fiction writers through a superb first collection, appropriately entitled The Moon Will Look Strange, and some distinctive anthology contributions. You’ll Know When You Get There, from Irish independent The Swan River Press, is a departure in some ways, in that the collection has a very strong common thread. As Lisa Tuttle writes in her introduction, “Lynda E. Rucker writes haunted house stories the way they should be written – hers are original, weird, and compelling, and as much about the people as the place.”

Aficionados of the tradition ghost story will find much to enchant them – in fact, one story, “Who Is This Who Is Coming?” is one of the best tributes to M.R. James I’ve read, at once comprehensively referential, sardonically funny, and ultimately chilling. But there is plenty more experimental and challenging work too. The question of who haunts what and how comes up again and again in the tales, with no single clear and prescriptive answer. You can take a guess, based on the title of the last story in the book, “The Haunting House,” what one type of manifestation is, but even then its precise significance and the ultimate outcome is left unclear.

Obviously, I don’t want to spoil too many of the careful reveals, not least because they’re more than worth waiting for. A title like “The Queen in the Yellow Wallpaper” is a fair giveaway, though, that this is a story about the legacies of Charlotte Perkins Gilman and Robert W. Chambers. Lynda E. Rucker has already written in the Carcosa vein, contributing “Yellow Bird” to Chaosium Inc.’s excellent anthology of King In Yellow Mythos stories by women, Cassilda’s Song, and this is a different and very satisfying variation on the same theme. “The Receiver of Tales” recounts the dilemma of someone haunted by, well, actual strange tales. “The House on Cobb Street” is an exercise in the Stephen King urban legend style of haunted house story, which reinvigorates the cliche through some subtle and finally poignant excursions into shifts of perspective and unreliable narration. And as the introduction suggests, there’s a powerful sense of place at work allied to some very diverse locations, from Jamesian East Anglia to rural Ireland to the American Deep South. But “Where the Summer Dwells” is as much about “the influence of Karl Edward Wagner” as it is about the Southern landscape, and “The Wife’s Lament” spins a modern variation on an Old English lyric with the same title; often in these works, the literary legacy is also doing the haunting, not least in the consistently fine and finely turned prose.

Readers may find it hard to get hold of this collection given the publisher’s location, though bear in mind that the price includes worldwide postage, but the stories are more than worth the effort. Hauntingly good.

She pressed on down the beach. She thought of the strange coastline at Wells-next-the-Sea, with the pine forest stretching right down to the beach. She turned and scanned the horizon behind her, half-hoping to see a hooded figure in pursuit, but there was only the sand, the sea, and the night sky above. The sea was as black as the sky, and you could mix them up, fall into either, and drown. If I drowned, Fern thought, I would never have to go back. I could stay here. In a thousand years, archaeologists might uncover my bones. Or I’d be lost forever in the sand and the silt and the sea. Both options seemed equally appealing, and far more tempting than the idea of getting on a plane at the end of the week and returning to her old life. -”Who Is This Who Is Coming?”

We have come to Carcosa. That’s the name, anyway, that my partner’s sister gave to this house, in some flight of fancy back when she was still well. Or so we thought. I suppose even at that stage she might have been—might have been what? “Starting her descent into madness” sounds so very Gothic; nowadays we use words like “bipolar” and “major depressive disorder” to make it sound like those episodes are mere maladies which require only a proper course of treatment to set their sufferers on the path to a cure. And yet what bedevils Sarah seems not so much a disease of the mind or body as it is a sickness of her soul—and I don’t believe in the soul. – “The Queen in the Yellow Wallpaper”