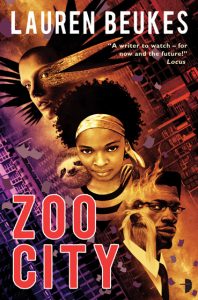 Zoo City is a ghetto in Johannesburg, populated by outcasts. Each person there is marked by the wild animal that appears just after they kill someone (intentionally or not). Animal and human become extensions of one another, and any “Zoo” unfortunate enough to lose her animal gets a visit from the Undertow, an existential black cloud that grinds its victims into oblivion.

The narrator of this hip, fast-paced urban fantasy (winner of an Arthur C. Clarke award) is Zinzi: former journalist and junkie with a tragic past, now forced to work for a company that runs internet scams in order to pay her drug debt and ever-mounting interest.

Along with a wild animal, each Zoo acquires a shavy, a special ability. Zinzi’s animal is a sloth that she wears slung across her back. Her shavi is finding lost things. In fact, she can sense all the things everyone has lost whether she wants to or not, hovering around them like ghosts, some wispy, others thick as chains.

Although Zinzi despises missing person cases, when things start to get ugly with the loan sharks, she takes a gamble on a job searching for a missing teen hip hop star that could earn her enough money to buy her freedom.

Despite the aforementioned fantastic elements, Zoo City has a gritty, contemporary realism that adds gravitas: the refugees from the Congo, the details of Johannesburg locations, life in the ghetto, and the constant, low hum of guilt and desperation of an ex-con who has all but accepted her station in life.

In the front story we follow Zinzi in her attempts to find the missing teen star, extricate herself from her unsavory employers (both the scammers and the ones who’ve hired her to find the singer), navigate the perils of the Zoo, and reconcile herself to the immanent departure of Benoit, her boyfriend who has just learned that his long-missing wife and children have been located in a refuge camp.

The political and emotional subtext of this character and her world elevates Zoo City beyond the standard urban fantasy fare, and in fact, the realism of Johannesburg seemed nearly as exotic as the fantastic elements. This entertaining novel has got all the style of a noir thriller, magical animal familiars, and the edgy cool of cyberpunk.